We bought a farm

I posted a picture on Instagram the other day and someone commented that I had been really quiet on social media lately and they assumed I was on vacation. I laughed out loud when I read that because it really couldn’t be the further from the truth.

We have been growing cut flowers on a small plot of rented land since day one. And while we have tried to buy numerous properties over the years, including the field that we farm here at home, each and every one has fallen through at the final hour. After the last heartbreak, Chris and I finally put the idea of ever being able to have a farm to call home out of our minds. So writing this post is really unexpected. I’ve been wanting to say this for over 10 years since Jasper was a baby – we bought a farm. Chris and I eagerly told them that we were interested in the property and if it was going to go on the market that we would love to make an offer. In our little valley, farms rarely go up for sale. Almost all land transactions take place behind closed doors. Because the farmland here is some of the very best in the country, we truly never imagined that a plot would be within our reach.

That conversation with them was the first glimmer of hope that I’ve had in a long time. But since our hearts had been broken so many times before, I pushed all thought of it out of my mind. So when their realtor called a month later telling us that we had first crack at the property, I was completely shocked. When we first moved to the country from Seattle we didn’t understand how different the two worlds would be. In the city people are very separate and go about their lives independently. Even though everyone lives very close together, there’s strangely a lot of privacy and no one really cares what you do. In the country, it’s exactly the opposite. Since there’s not much going on, your neighbors often watch your every move. Everyone keeps a watchful eye on everything. At first it was tough adjusting to the constant scrutiny, but eventually we learned that country neighbors are the best kind of neighbors. They come over after a storm and help you clean up your yard, they let you borrow tools, they bring you extra tomatoes from their garden and they always make time to chat, usually about the weather.

When we arrived, we were they youngest family in our neighborhood by several decades and quickly got dubbed the City Slickers because we let our manicured lawn grow long, had chickens everywhere, two naked children running around and I was often in the yard spraying compost tea or hanging crystals in the apple trees. We were the black sheep on our road.

It took years for the nickname, and the judgement to fade, but eventually it did and we were finally accepted into the fold. We recently found out that it was watching our wild naked babies grow up into sweet, respectful kids, and Chris and I working so unbelievably hard for years on end that eventually won them over. I’ve already been asked by close friends if this is the dream farm that I’ve posted about over the years. It’s not. This property was a completely unexpected twist of fate. The land is adjacent our little field out back and is what a lot of people thought was ours because it’s in the background of many of our pictures. All of this time time I’ve been telling people that our property line ends at the blueberries. Now the blueberries are ours!

After the call from the realtor, the process took on a life of it’s own. At every bend in the road I expected things to fall apart. But they never did. All the pieces just kept coming together. The process was daunting though. On top of an already jam packed summer creating our new online course, the farm process added a mountain of meetings and inspections, business plans, projections and a crippling amount of paperwork – so many times it felt like there was no way it was going to work out. To our total surprise, it did and I’m still pinching myself. 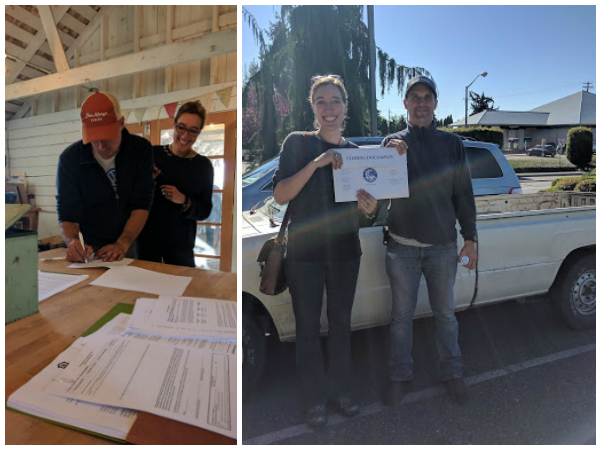 Less than 2 weeks ago we were sitting with our banker signing the title documents. And we got the keys from the owners this past week. I still can’t wrap my mind around the fact that we actually own 25 acres of the best soil in the country, plus a huge barn and a house, and four acres along the Skagit river. I still can’t believe it’s real!

This past week we started cleaning out the barn and getting it ready to be the new home of our Floret shop. We’ve been meeting with contractors, taking truckloads of old junk to the dump, and with each step it’s starting to feel more like home. Up until this point we have been farming on two tiny acres and running our seed company out of a series of greenhouses, our basement and a 300 square foot garage. We are so used to making due with very little and working with what we have. The joke around here is that we’re constantly playing musical rooms in order to get everything to fit. So stepping into a huge barn and finally being able to set this business up properly is beyond our wildest dreams!

While this new chapter is such a blessing, it is also going to require a lot of attention and focus. In addition to setting up the barn for shipping, we need to start the long process of converting the fields to flower production after decades in conventional berry farm. Our plan for the land is to transition it into organic seed and dahlia production. We will be conducting more extensive variety trials and starting to breed some of our own specialty cut flowers. While there is a lot of work ahead, this project couldn’t be more exciting to me. Our long term hope is that we can someday open up the flower fields to visitors. We are still a long way away from that, but we’ll be sure to share more with you as we embark on this new journey.

On Thursday I’ll be sharing some other exciting news about a project that we’ve been pouring our hearts and souls into since February. It is going to help so many people and I can’t wait to share all of the details with you here.

Thank you so much for all of your kind notes, emails and words of encouragement about someday finding our forever farm. Dreams really do come true, sometimes they just take a lot longer than you want. I am so excited about what this new chapter means for our business, our life and our ability to bring more beauty into the world.