It’s here! Floret Farm’s Discovering Dahlias is officially going out into the world, onto the shelves of bookstores, and into your hands. I hope you love it as much as we do!

I can’t thank you enough for your excitement surrounding this book and for cheering us on the entire way. I’ve been growing dahlias for nearly 20 years now, and in that time I’ve never seen another flower elicit such a strong emotional response in so many people. Dahlia mania is a real thing!

To celebrate the launch of Discovering Dahlias, Jill and I filmed a special video in the flower field:

I also wanted to share a little more about the making of Discovering Dahlias and some behind-the-scenes photos of what making a book actually looks like. 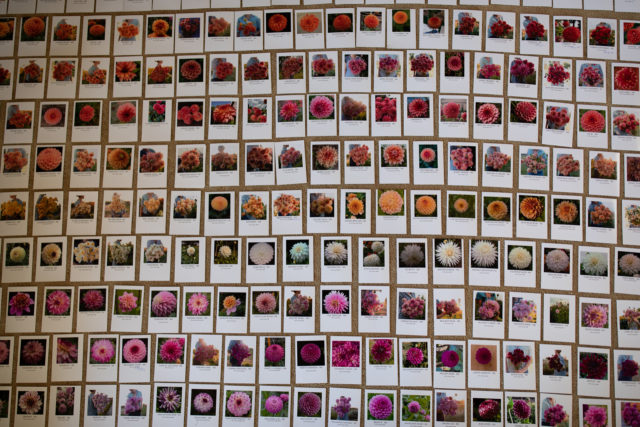 When we set out to write this book in early 2019, our intention was to create the most beautiful, informative, and inspiring book about this beloved cut flower.

We wanted to write the dahlia book that we wished existed. Most of the dahlia-related books on my bookshelf fall into two camps. They are either highly technical, geared toward growers wanting to win awards at dahlia society shows, or they are coffee table books, heavy on photos and light on information. 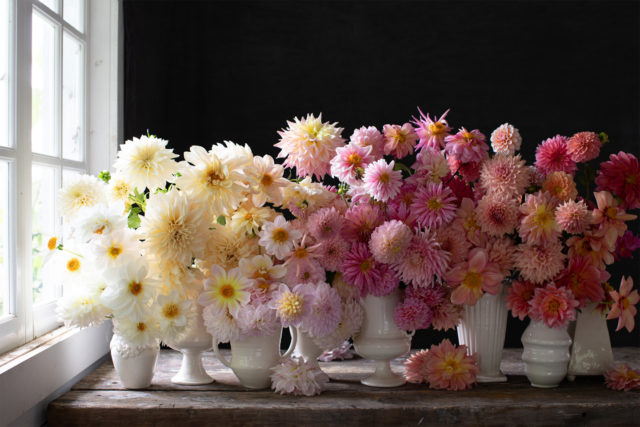 Like our two previous books, we wanted it to be both beautiful and informative. We wanted to present thorough, specific information in a simple and easy-to-understand way.

But most importantly, we wanted to share the overwhelming diversity and beauty of one of my very favorite cut flowers. 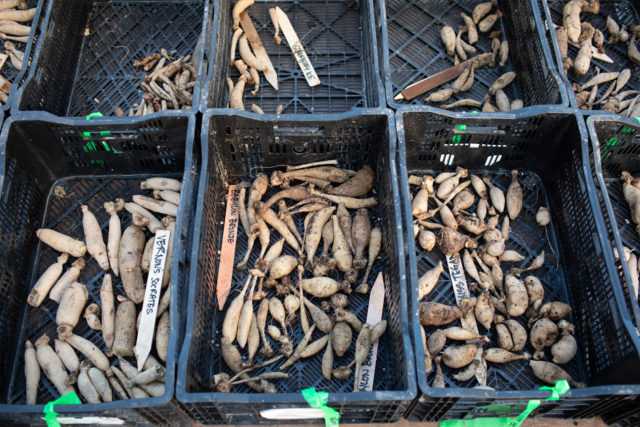 We thought that writing a single-subject book would be somehow easier than a wide-ranging topic like flower growing or arranging.

In our minds, it seemed much more straightforward. But in reality, the project proved to be incredibly complicated and very layered because we did a deep dive into all things dahlias. 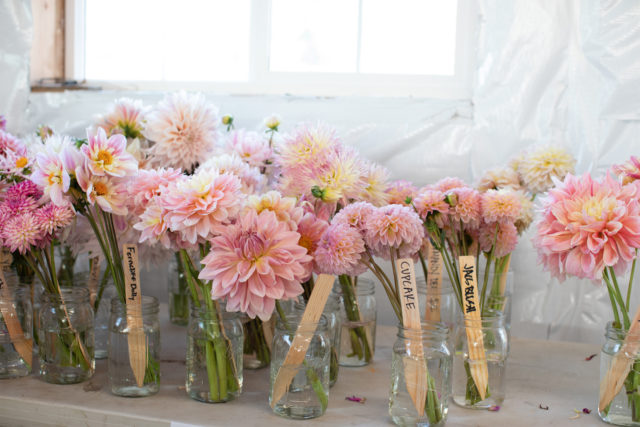 And the Variety Finder section of the book just about put us over the edge as we photographed and wrote descriptions for nearly 600 individual varieties — a project that we’ve been working on for a number of years.

Then we had the painful task of narrowing down our favorites and sorting them into a streamlined color order even though they don’t neatly fall into straightforward categories. 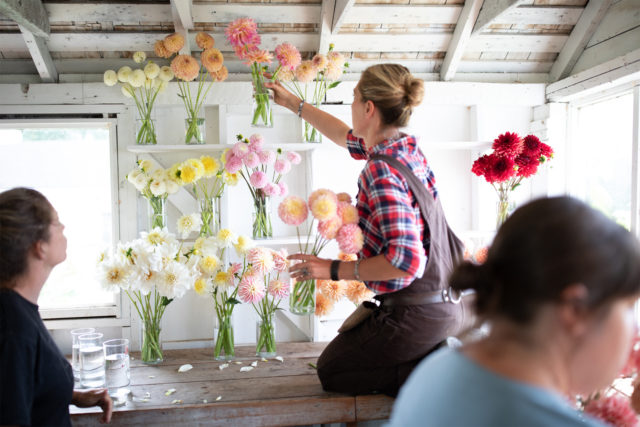 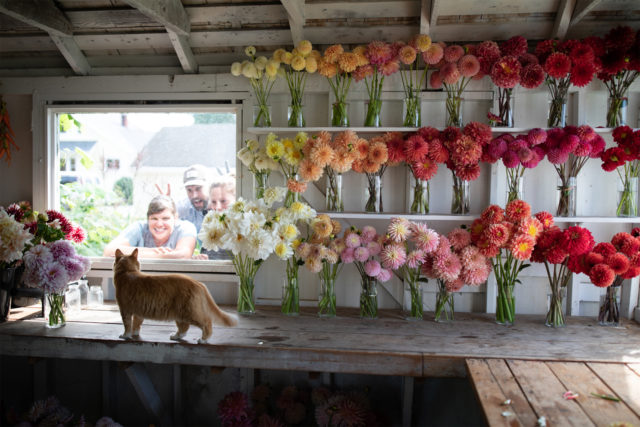 The book was originally only going to feature 200 varieties, but after documenting so many amazing varieties, there was no way to cull the list down that hard.

So after a lot of begging and negotiating, we eventually got our publisher to increase the page count, which allowed us to feature 360 varieties in total. Making the book stretched us in so many ways — mentally, emotionally, and creatively, and there were many times we all wanted to throw in the towel.

But the day I held the finished book in my hands made all of the 4 a.m. writing sessions, weekend photo shoots all summer long, and endless hours of editing worth it. 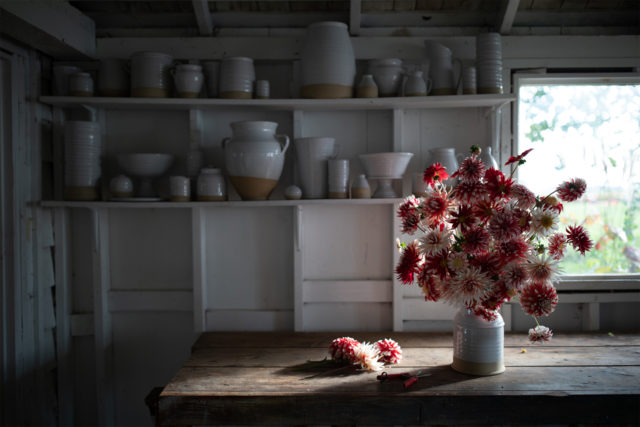 The most exciting and rewarding part of making this book is knowing that it will help inspire and educate gardeners all over the world and help spread the magic of dahlias far and wide.

It is such an honor to have the opportunity to be able to write a book, and because of all of the incredible feedback we got from readers early on, I know it’s the book you most wanted us to write next. 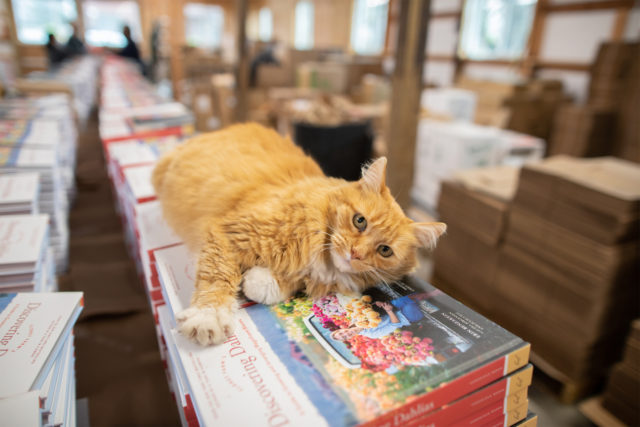 For more than a month, the Floret Shop has been filled with mountains and mountains of books. I have signed and the team has packed more than 15,000 pre-ordered copies!

I love imagining all of the mailboxes that they will be arriving in and all of the excited gardeners cracking the book open for the very first time! If you haven’t purchased Discovering Dahlias yet and you’d like to order one from the Floret Shop, we just restocked signed copies.

And if you have a local independent bookstore or gift shop, they could use your support right now. Discovering Dahlias is available from most major book retailers, too. 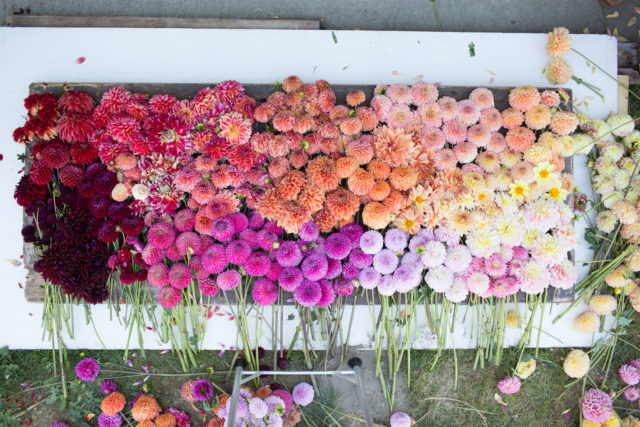 A massive thank you for your enthusiastic support of Discovering Dahlias. Thanks also to everyone who has sent sweet messages, posted heartfelt reviews, shared dahlia memories and personal stories, and tagged #discoveringdahlias on Instagram.

You guys are amazing! 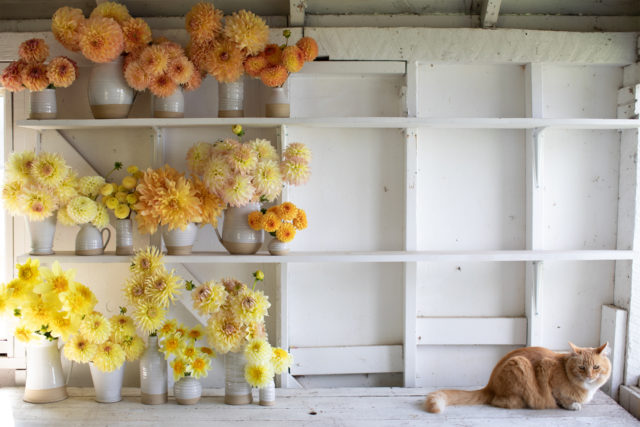