Sweet peas were the gateway 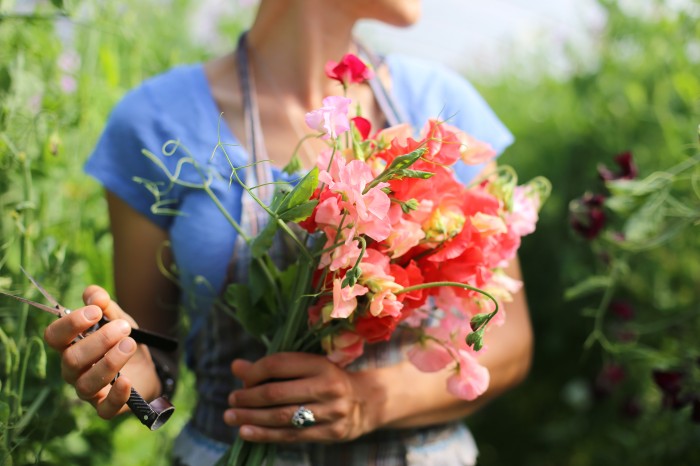 Have I ever shared with you the story of how I became a flower farmer? Growing up, I bounced back and forth between the city and the suburbs a lot since my parents were divorced. I loved all of the choices that the city had to offer. Wonderful food, art museums, massive libraries that stretched on forever and the ability hop on a bus, practically anytime of the day and within minutes be somewhere completely new. But it was always so loud and crowded and intense.

Obviously the suburbs were much, much different. While I liked how things were quieter and the fact that almost everyone had a yard, there wasn’t an ounce of uniqueness or soul to be found for miles. Neither felt quite right or much like home. But summers, they were my saving grace. Sometimes I would get to stay on my aunt Debbie’s farm for a week or two and help with the animals, and her overflowing garden. I would collect fresh eggs for breakfast and pitch in while she canned and preserved everything in sight. We mucked stalls, chased chickens, ate homegrown bacon and listened to country music from sun up to sunset. While utterly exhausting, those fleeting days are some of my favorite childhood memories. Every summer my sister and cousins and I would make the five and a half hour trek across the state to our grandparents house. They lived in a small town, bordering a slightly bigger small town that was surrounded on all side by nothing. Well not nothing. There were wheat fields and onion farms and a sky that went on forever. The days were hot, and boring and perfectly wonderful.

During working hours we were often shuttled down to my great grandparents place for the day. We played in the creek, drank warm soda pop, ate way too many caramels, bickered back and forth about nothing important and watched hours and hours of murder mystery t.v. My great grandmother, Grammie was somewhat of a legend, or at least her old garden was. I’d hear stories of how she’d built it, one wheelbarrow at a time from the ground up on completely barren land in the desert of Nevada. Back in the day she poured her heart and soul into that little plot and everyone who knew her then would smile as they recalled the blue morning glory covered fences and overflowing flower beds. By the time Grammie came into my life, that little oasis was just a magical memory. She and my great grandpa Tater Dear had been moved north to be nearer to family as they aged and the garden didn’t make the journey.
Grammies’ health had declined to the point that she was pretty well bedridden by then. On those long hot days she would tell me tales of her flowers and then send me outside with scissors to pick a bouquet for her bedside table.

While nothing like her old garden, there were still a few treasures to be had if you dug around enough. Leggy snapdragons, a few hybrid tea roses here and there and always a rainbow of sweet peas scrambling up the carport posts. Ahhh, that smell, it still totally reminds me of her.

I took my flower picking job very seriously! After gathering a collection of slightly wilted blooms from the yard, I’d dig through her stash of old dusty bud vases and find just the right one. Those bouquets must have been a sight but she always cooed and doted over them as if they were diamonds or fine china. Grammie passed away when Elora was just a baby, the very same year we bought our house. I was able to bring a few of her and Tater’s ashes home with me and spread them in my new garden. I planted two long rows of sweet peas down the center of the plot in their memory. They bloomed better than any crop I’ve grown since. So well so that I ended up sharing the abundance with anyone and everyone I came in contact with! During that abundant season, word got out and someone ordered a jar of flowers for a friend. I’ll never forget that day as I nervously knocked on her door and then so awkwardly thrust the bouquet into her hands. Surprised, she buried her face in the flowers and immediately tears welled up in her eyes. She was instantly transported back to her own childhood summers, to a time of great happiness and to her own grandmother’s garden…and right then and there I was forever changed. Witnessing the profound impact that such a small thing could have on a person, I knew I had found something worth exploring. The following season I replaced all of the vegetables with flowers, the season after I dug up our orchard and put it into more, the season after we built our first greenhouse and on and on from there flowers have taken over my life. I love to think I’m continuing the legacy that Grammie started almost a century ago. My secret wish is that someday they’ll tell stories of my garden and its magic with the same twinkle in their eyes as they did about hers.

** In celebration of the New Year, I’m devoting the entire week here on the blog to sweet peas. We’re going to dig into growing, the best seed sources, post harvest handling tips, my favorite varieties and more. So stay tuned!

Previous
Exhaling
Up Next
FLOWER FOCUS: My favorite Sweet Peas