I’ve been longing to grow Celosia for many seasons now but here in the cool PNW, cultivating them outdoors is pretty iffy. While farmers everywhere seem to be swimming in fields of them from mid summer until frost, I’ve only had success by planting them under cover. With greenhouse space being limited, there has never been an opportunity to give them a proper go. But last spring we put up three new 140ft hoops and set aside adequate space for a trial. My amazing Gloeckner rep Tom Jobb (track this guy down!) did a huge amount of work and got me every single variety on my wish list. Packets of seed started rolling in from all of the generous donors throughout the months of March and April, and we got seedlings growing in their plugs trays by mid May. Branching types like the Cramer’s, Kurume’s and Celway’s were sown into 72 cell trays and single stem or faster growing types like the Bombay’s and Pampas Plumes were sown in 288 cell trays. Unfortunately the whole trial got bumped back a month later than planned because our spring hoops didn’t finish blooming as early as we had hoped. So plants were set out in late June vs. mid May like we had intended. 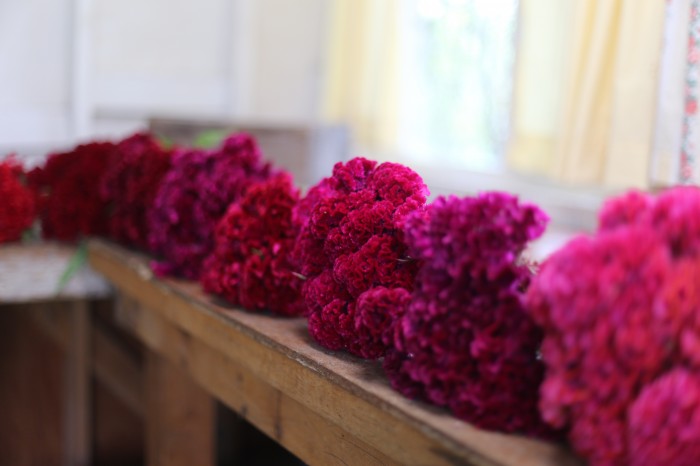 There is nothing like a good side by side trial to show the true nature of a plant. Seeing a variety growing solo is one thing, but when you can hold it up next to half a dozen other varieties with similar colors or shapes, that’s when their unique differences really are revealed. 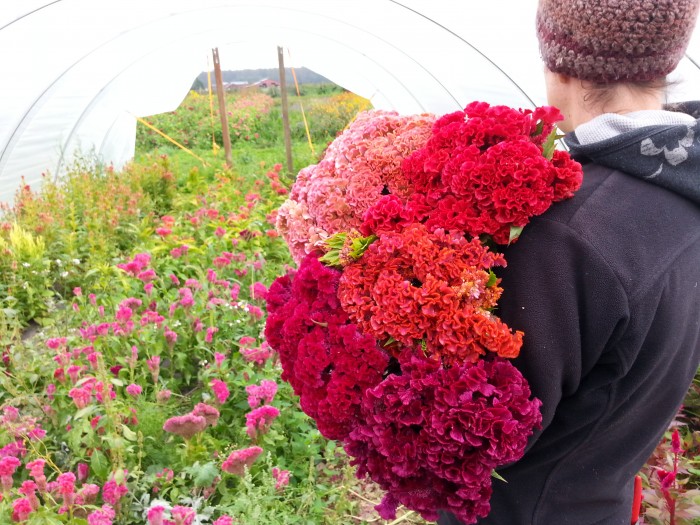 Lily with an armload of Celosia from our trial

Since we have an abundance of 9×9″ pre burned landscape fabric on hand, all of the branching varieties were planted at this spacing. In the future they will get at least 12×12″ or even 12×18″, especially if we pinch them again. Single stem types like the Bombay’s went into 6×6″ fabric and this spacing seemed ideal.

When plants were about 8″ tall we went through and pinched all of the branching varieties. Looking back, they should have been pinched much harder so that branching would have started down lower, resulting in better overall stem length. This year we’ll do better. Plants grew very well in the low hoops and the first stems were harvested by late August. The Supercrest mix was the first to flower followed by Forest Fire and the Pampas Plume mix, then Sylphide, the Bombay’s and Sunday’s and lastly the Enterprises, Celway’s, Startrek’s, Cramer’s, Chief’s and the other odds and ends. While all were beautiful, there were certainly varieties that stood out from the rest based on color, plant vigor and overall bloom consistency. Of the 59 varieties, 20-25 made the final cut. Following are many of my favorites but keep in mind that results will certainly vary depending on your location and particular floral needs. For example, if you’re growing for wedding and design work you’d probably prefer the wheat types or pastel tones, or if you’re into drying you’d most likely want to focus on the Cramer series, whereas I was focusing on bright, bold, large flowers for mixed bouquets.

For a super detailed report on every variety in the trial, including each ones highlights and problems, go to Growing For Market and order the February and March 2014 issues. Both are available digitally.

**A huge thank you to all of the companies who so generously donated seed for this trial:Takii, Pan American Seed, Genesis Seeds, Kieft and Sakata. If you’re interested in growing any of these varieties they’re available through Fred C. Gloeckner Co. 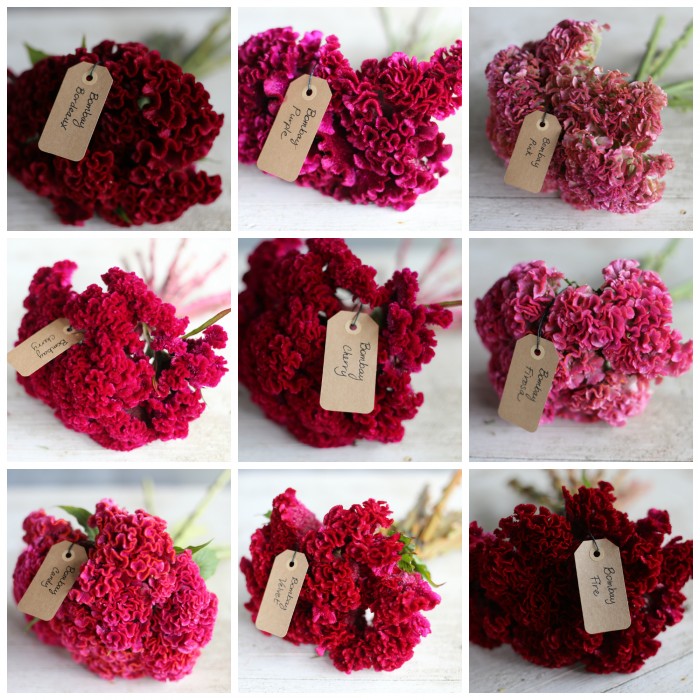 The Bombay series is a great, fast crop of fan shaped blooms, available in a wide rainbow of colors. We found that while all are beautiful, some varieties had a high % of fasciated stems or aborted flowers. Of the fifteen we tested, these four were the best. ‘Pink’: Our favorite of the Bombay’s! Thin stems, huge flower heads which were more oval than fan shaped and they resemble dark blush pink hydrangeas. Perfect for wedding work! Supercrest Mix: The first variety to bloom in the trial, even before the Pampas Plumes. Monster four foot plants which were loaded with perfectly sized stems. A wide range of beautiful pastel flowers including white, pale lemon, peach, coral, rose, salmon and a few burgundy. Fan shaped flower heads with 10% being plumes. Great in wedding work. Needs to be succession planted 3-4 times for a season full of flowers. A real keeper! Cramer’s ‘Rose’: Large fat fan shaped blooms. Color varied between rose and dark magenta. Head shape was consistent but necks a little bit weak. This could have been due to being planted is a less fertile spot. Growing again because of the exceptional color. Temple Bells ‘Orange’: Nice and tall. Lots of branching and produced tons of useable stems for bouquets. Flowers are a rich salmony orange and range from small brains to thick fans. Foliage is yellow/green. Roughly 10% of flowers had thin magenta streaking. The ‘Sunday’ series.
We grew these beauties with no pinch which resulted in one large foxtail flower each.  Future pinching is a must for multiple stems per plant. Up to six could be expected. Salmon:  Our favorite color in the series, the blooms were a tropical clear orange.  Heads were more pointed and feathery than others. A small percentage reverted to combs. They blended beautifully with pink, orange, yellow and green flowers.

Dark Pink:  Rich magenta flowers that could be paired with almost anything!  Very uniform, vigorous and was our favorite pink spike from the entire trial. 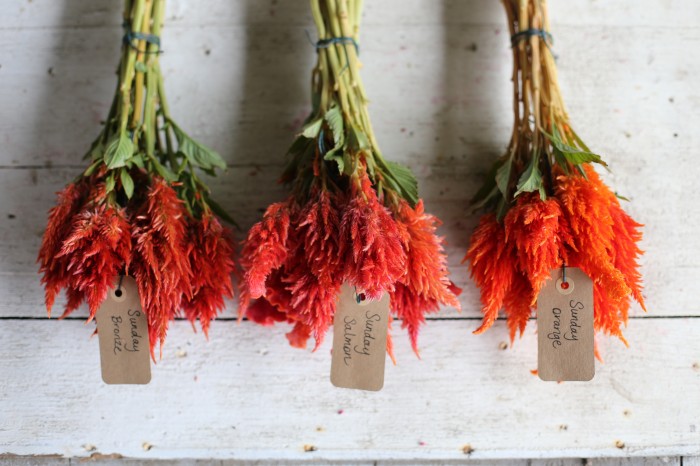 Sylphide:  A very productive variety that was also fast to flower.  Blooms are a lemon/lime in color and can be paired with almost anything.  Eight to ten stems per plant but with a low pinch, more could be expected.  A keeper! 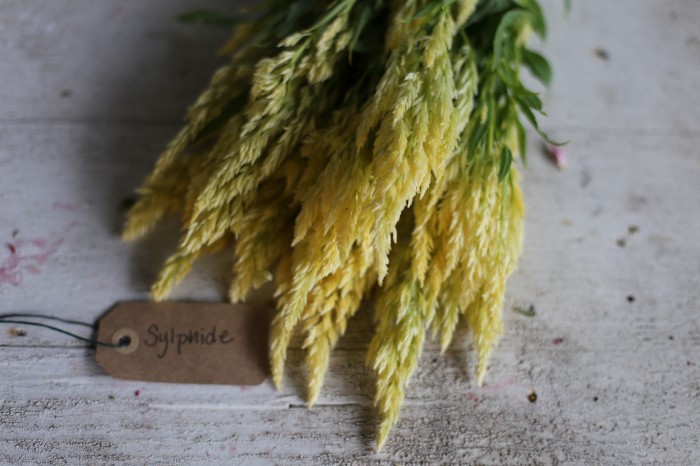 Celway series.
A great group of plants which were very vigorous and disease free. They could all benefit from pinching at 6″ tall.

Terracotta:  A very prolific grower with matte green leaves and long strong stems. The color is a muted salmon-washed out orange. 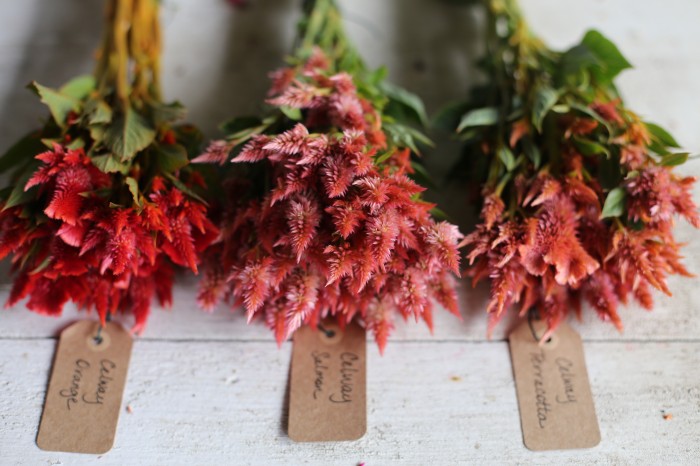 Enterprise series
I think this series has great potential!  They bloomed right in sync with the Bombay’s, so are easy to schedule and offer a unique flower shape and color range.

Pink: Identical in color to Startrek ‘Pink’ but the stems were stronger, longer, fuller and more visually appealing.

Wine:  A beautiful dark maroon flowered variety. They would be perfectly paired with Benary Giant Wine zinnias. Eight to nine stems per plant can be expected with a hard for lower branching. As you can see when it comes to Celosia the choices are almost unlimited. In order to trim down the number of varieties in our trial I skipped yellows, purples and greens but still ended up with a total of 59! This year of course I’m trying the rest ; )

Even if you can only tuck a small test plot in at the back of your garden each year, I promise you’ll certainly discover some new and exciting treasures from this family of plants. Celosia varieties waiting in line to have their portrait taken.

Do you grow Celosia? Is there a favorite variety, seed source or growing technique you’d be willing to share with us?

If so, leave it in the comments section below!