Written by
Floret
A friend recently suggested that I don’t show enough of the raw, nitty gritty, behind the scenes action that goes into growing all of the beauty here on the farm. I argued that some of what we do is so gnarly, it might actually scare people away. She held fast to her opinion, finally daring me to show our newest and possibly ugliest passion.
Composting…ahem….fish waste.
Well I’m a sucker for a good dare, so, here we go.
In order to get really amazing flower crops, we put a lot of effort into creating the healthiest environment possible. Starting with the soil we add in loads of rich compost, minerals and microorganisms so each plant can grow to its healthiest potential.
This season after failing to get our compost piles hot enough we started experimenting with different types of nitrogen.

Horse manure, while readily available, just didn’t give us enough heat. Neither did our chicken coop bedding, grass clipping or garden scraps.

Finally after much digging, we found something with enough kick for the job. Fish guts!
You know you’re a nerd when you Google “how to compost fish waste” and spend mornings calling every seafood processing company within 100 miles asking to speak with their manager about the possibility of hauling away their “leftovers”!

Finally after a dozen unsuccessful tries I found a processing plant that would hear me out. While it did take a bit of explaining, the manager finally agreed. The looks on the employees faces when we pulled away was priceless! You could tell they were totally mystified.

Once we had a direct line on a strong nitrogen source we then started scouting the neighborhood for additional ingredients. While our farm produces quite a bit of bulk it wasn’t nearly enough to satisfy this new en devour. In order to balance out multiple tons of fish sludge we needed to quadruple or even quintuple our stock.
Two massive piles of horse manure, a truck load of leaves, 15 bales of rotten hay and 11 heaping truck loads of weeds later we were in business. 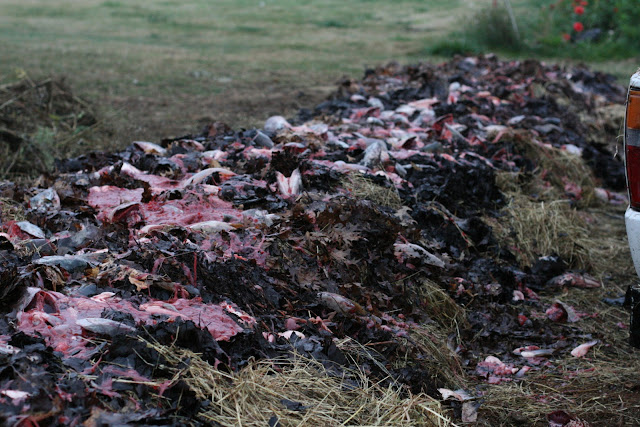 Layering (over and over) fresh green stems/stalks/leaves with lots of dry brown material and then a thick layer of fish we made a 75 ft. long windrow of yumminess. 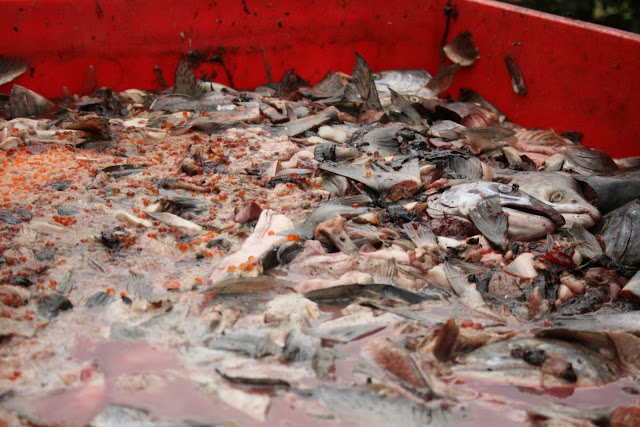 In my composting notes I wrote:
BE SURE TO SPREAD THE FISH IMMEDIATELY,EVEN IF IT’S AFTER DARK! THE LONGER YOU WAIT, THE MORE STRONG IT SMELLS!
Holy smokes did it reek! Especially when I put off the dreaded task of emptying the bin for 2 days during a warm week in September. I certainly learned my lesson on procrastinating ;)
It amazes me that something so disgusting can be transformed and ultimately support and nurture such beauty.
The definition of Alchemy perfectly describes what I’ve witnessed: “The magical power or process of transmuting a common substance, usually of little value, into a substance of great value.” 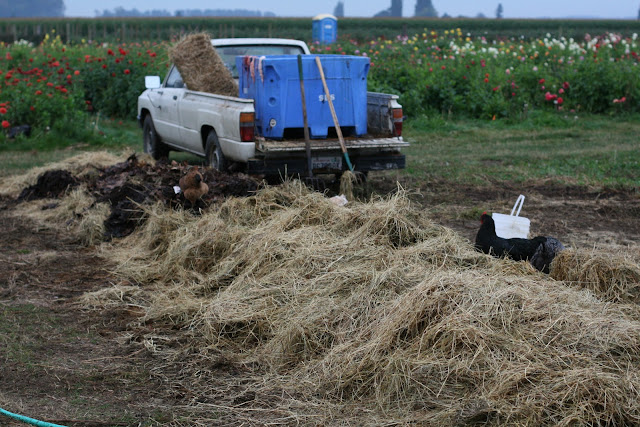 Only two days after we layered all of the ingredients together, the pile was hovering at a whopping 165*!! 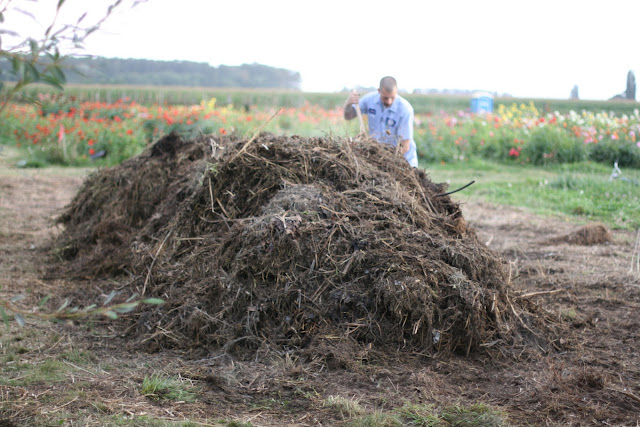 For proper hot composting you want to get your pile heated up to 158-180* and then turn it every three days, incorporating all of the ingredients thoroughly throughout the pile. That way all of the pathogens and weed seeds can be killed by the high temperatures. 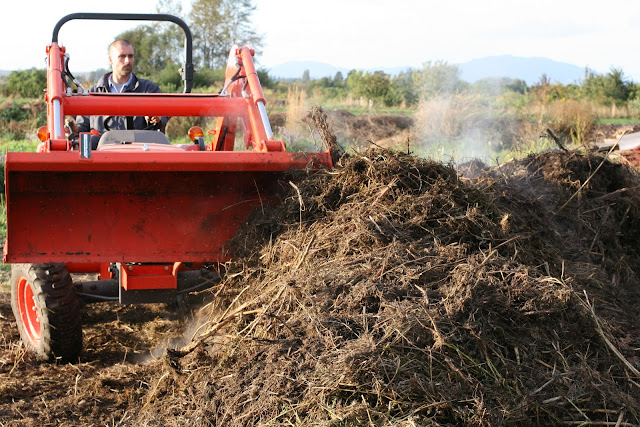 We expected that on the first few turns it would be an absolutely disgusting experience, with hunks of rotting fish, maggots and lots of smell.
Ok, this is the craziest part. After just 3 days of cooking, we couldn’t find a trace of the fish anywhere. Entire heads, spines, tails….gone, completely vanished.

The pile has been simmering out in the back field for a  few months now. By February it will make its way into our potting soil mix, the greenhouses and new planting beds.Taking something that would have otherwise been wasted or potentially toxic and transforming it into a life giving and enhancing form is so incredibly inspiring.

So, there you have it. Reincarnation at its finest and the truth behind the beauty here at Floret .